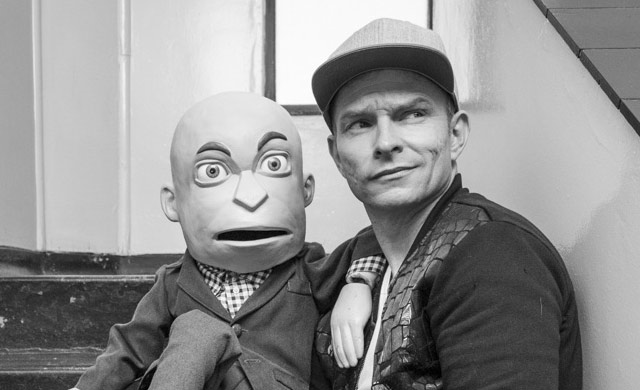 The creator of Mr. Chester Missing, Conrad is S.A. s ONLY 4-in-1 MC, and a double International EMMY nominated and multiple award winning comedian.

He combines hilarious comedy with world-class puppetry and has done so for over fifteen years to local and international acclaim. He has worked all over the world, has featured on local and international television and is a frequent guest at some of South Africa s biggest comedy events, as well as the prestigious ‘Just For Laughs Comedy Festival’ in Montreal.

Conrad has an MA in corporate culture (anthropology) from WITS. He has had extensive experience in implementing comedic culture change interventions for the likes of FNB, Goldfields, Sun International, SAA and more.

He uses a combination of his razor sharp comedy with an understanding of human dynamics to create effective corporate communications to sweeten the effective delivery of your messages.

His outspoken political analyst puppet, Mr. Chester Missing, has fast become a household name. His television interviews with South Africa’s political elite have received wide acclaim. The use of a puppet to get political players to let down their guards is completely unique – and Chester frequently does the same things for corporate executives.

Conrad has audiences in stitches by talking to himself through a variety of extremely eccentric characters. Self-ridicule has never been this much fun. You’ll meet Mr. Chester Missing, Hilary (an ostrich made from two feather dusters and a slipper), and DJ Hoodie (a puppet made from a hoodie) who actually DJs. The show is highly interactive and the audience members hilariously become the puppets.

What the papers say:

“Brings the roof down”  – The Independent, London

“Taking ventriloquism beyond anything in the UK or America” – Sunday Times, London