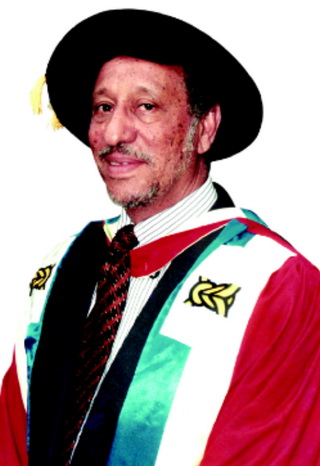 Louis was a descendant of a large and long lineage of extraordinary family members. His grandfather was J. E. Casely Hayford and His great grandfather, Reverend Joseph de Graft Hayford, was one of the greatest politicians of his day, and the most active member of the Fanti Confederacy of 1867. His grandfather, Mr Joseph Ephraim Casely-Hayford, was highly regarded as one of the most celebrated Africans of his time. He was the one who advocated the need for African countries to unite for their eventual emancipation – political, economic and social – which later found expression in the establishment of the Organisation of African Unity (OAU), now the African Union (AU).

Louis’ grandfather was a family man who valued education and training of his children. As a result, Louis had twelve well educated Uncles and Aunts to look up to in addition to his father, Mr Archie Casely-Hayford, who was a well-known barrister, a public figure and a consummate politician and turned out to be the most famous of the Casely-Hayfords up till then.

Louis attended Adisadel College, Cape Coast from 1948 to 1952 and later to Dulwich College, London, from 1952 to 1955. In October 1956, Louis entered the University of Manchester’s Faculty of Technology where he obtained his Bachelor of Science in Technology (BSc Tech, Hons) degree in July 1959 and his Master of Science degree in 1960.

Louis accumulated a lot of knowledge and experience by travelling to many power installations worldwide. These visits included the Hitachi Works in Japan in 1969 and the Snowy Mountains Engineering Corporation in Australia in 1976. He was on attachment to Ontario Hydro, Canada in 1964 and again in 1978 where he participated in the Final Report of the Power Equipment Review Board of the Volta River Authority.

Dr Casely-Hayford’s distinct contributions to VRA and therefore, of Ghana’s development process were numerous. He believed in the vision of beneficial sub-regional cooperation in West Africa and played a pivotal role in the realisation of the Ghana-Togo-Benin power interconnection project and the interconnection of the Ghana- Côte d’Ivoire electrical systems.

Louis travelled extensively to canvass support and financing for the construction of a second hydroelectric project in Ghana. And having secured the funds, he oversaw the construction of the Kpong Generating Station and associated irrigation system.

He was the brain behind the extension of power to the Northern sector of Ghana at a time that many in the world’s international financial institutions and some of his own colleagues thought the scheme would be impossible because of various challenges facing the Northern Region. This project laid the infrastructural foundation for the pursuit of a truly national electrification vision.

Great men are just in short supply.Great men elevate their spirit to the level of God where all things are possible. If Louis had taken the position that extending electricity to the north was an engineering impossibility, Ghana would have been short changed by that poor thinking. Louis was not a routine thinker. He wore the spectacle of possibilities and Ghana benefited from this unusual gift.

VRA benefited enormously from his fascination with knowledge in technological innovations that could improve the productivity of any institution. Through his leadership effort, VRA was able to secure the latest Apple Macintosh computer of the day to facilitate production of the maiden edition of the newsletter in the institution and thereafter maintained an enviable position as one of the lead adopters of information technology systems in Ghana.

The vision of the better future that Louis dreamt of was not limited to technical matters. He saw it as morally unacceptable for the large families of junior staff to be living in single room accommodation called “2-in-1” while the predominantly small families of senior staff lived in three room houses. He, therefore, introduced a policy in VRA for the provision of 3-bedroom houses for all staff.

He was also disturbed by the squalid conditions of those who lived in the unplanned slum area, called “combine”, which had developed at the entrance to Akosombo. Hence, when he became Chief Executive of VRA, he saw to their relocation and resettlement and therefore, achieved his vision of a future Akosombo with everyone in decent housing.

Beyond the VRA world, his sense of corporate social responsibility was exemplified by his inputs to the development of the Medical Services and the Akosombo International School among other initiatives.

In addition to his role at the VRA, Louis served the nation in various capacities such as a member of the Government Technical Advisory Committee on Energy (1979), the Ghana Tourist Development Company, Government Committee for the renegotiation of the Volta Master Agreement and simultaneously the National Energy Board (1985–1989). He was also Chairman on several Committees such as the Technical Audit Committee into Public Corporations (1981) and the Special Committee appointed by Government to recommend the reorganisation of the Petroleum Industry in Ghana (1987).

Louis Casely-Hayford was one of the prominent Ghanaians who took the idea of mentoring younger colleagues very seriously. In fact, there are quite a lot of Ghanaians currently holding important positions both in the private and public sectors who considered Louis as their main mentor. He was a philanthropist who was especially compassionate to the poor and the needy in and around his local community.

Almighty God in the creation story said let everything produce after its kind. It is true to say that Louis was fulfilling the scriptures. He was producing employees of VRA after his own strength, calibre and quality. He did not have “the only pebble on the shore mentality”. He was building a strategic national institution and not a personal fiefdom. In this sense, he was unique and particular.

In recognition of his various contributions to Ghana, he was presented with a Certificate of Honour in 1987 on the occasion of the 50th Year Reign of Odeneho Kwafo Akoto II, KMC. Louis was elevated to the position of Barima in recognition of his selfless and dedicated service to the Akwamu Traditional Area. In 2002, Louis Casely-Hayford was awarded a Doctor of Science (DSc) Honoris Causa by the Kwame Nkrumah University of Science and Technology. The accompanying citation inter alia described him as a patriot, scholar, management consultant and engineer par excellence. In 2011, the VRA presented Louis with an Award of Merit on the occasion of the 50th Anniversary for his significant contribution to the implementation of the Akosombo Project and operation of the Power facilities

Above all, Louis was a Christian who worshiped regularly with his wife, Fredricka, at the Holy Trinity Cathedral and later at the Ridge Church in Accra.

Dr. Louis Casely-Hayford’s legacy is embodied in his total dedication to serving VRA and therefore Ghana for over 28 years. He was a man who, like his great grandfather, his grandfather and his father, was an African patriot who whole-heartedly supported all national struggles towards the total emancipation of the continent. He had an unusual analytical and intellectually curious mind who could engage anyone in any intelligent discussions literally on any subject.