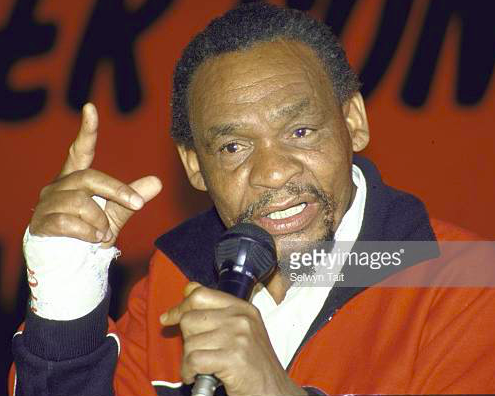 Elijah Barayi was born on the 15 June 1930 in Lingelihle, Eastern Cape. He was the youngest of the 10 children. His father, a municipal worker, and his mother, a domestic worker, encouraged his education and he completed his matric at Healtown Institution in 1949. Unable to continue to pay for his studies at Fort Hare University, Barayi went to work as a clerk in the Department of Native Affairs in Cradock. He joined the ANC Youth League in 1948 at the time when he was about to complete his JC. The impetus for him joining the ANC Youth League was preceded with a racist incident in town when some racist young white boys attacked him and Comrade Zinzele Ngalo, they subsequently fought back and defeated them.

Comrade Barayi became actively involved in the activities of the ANC Youth League and his leading role in the -defiance campaign in 1952 led to one-month detention in Cradock. In 1952 he joined the ANC, and was“taught politics” by the Rev Calata, a former ANC secretary general. Barayi11 recalled in an interview in 1991 how he joined the Defiance Campaign with enthusiasm. He remembered a group of volunteers, without papers, marching to the local police station, in defiance of curfew regulations bar- ring Africans from being on the streets at night.

On his release he came to the Witwatersrand where he was employed as a mine clerk and was later to be become the founding member of the larg- est union in Africa, the National Union of mine workers. As a mine worker, comrade Barayi was always at the forefront of the working class struggles for the betterment of the working conditions. He became a mine worker inthe early 1970’s. In 1981 he met then NUM general secretary Cyril Rama-phosa and became the first miners to join NUM. He was elected as a Num shaft steward and soon after was elected vice president of the union.

He became the founder vice president of NUM until to death. He played a prominent role in unmasking the National Union of mine workers to the in- ternational communities such as the Miners International Congress.