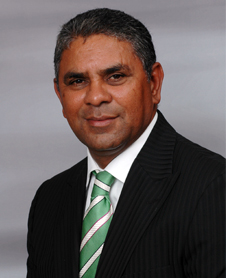 Fred Robertson serves as Executive Chairman of Brimstone Investment Corporation Ltd, a company which he co-founded in 1995. His Non-Executive chairmanships include Lion of Africa Insurance Company Limited, Lion of Africa Life Assurance Company Limited, Sea Harvest Limited, and House of Monatic. He also serves as non-executive director on the boards of Remgro Limited, Aon Re Africa (Pty) Limited, Swiss Re South Africa, and ASX-listed Mareterram Ltd. Fred’s trusteeships and patronages include, Chairman of the Board of Trustees of the University of the Western Cape Foundation; Member of the Cape Peninsula University of Technology Entrepreneurship Advisory Board; Trustee of the Masizizane Fund; Patron to the South African Academy for Young Leaders; and Patron to the Youth Unemployment Peoples Project. In April 2016 Fred was conferred an Honorary Doctorate in Philosophy by the University of the Western Cape.

Last update on Aug 8, 2018
Published Aug 8, 2018
Author: Felix Mkiwa
Categories: South Africa
Tags: There are no tags for this post