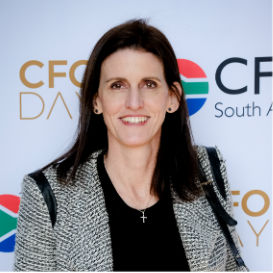 I have over 22 years’ experience in the financial industry. After qualifying as a Chartered Accountant and completing Articles at Deloitte, I joined De Beers as a Divisional Financial Manager. I then worked at Bateman Group for five years as the Group Financial Controller. In 2010 I joined MiX Telematics, a JSE and later also NY-listed company, where I became Group CFO after seven months. I enjoyed seven years at MiX, interacting with investors and analysts. I joined EOH in January 2019 as EOH’s group financial
director.

Some career highlights include:

Successfully listed MiX on the NYSE in August 2013.

Performed a successful capital raise of over $100m ($65m primary raise) as part of the NYSE
listing for MiX.

Nominated as a finalist in the inaugural CFO South Africa awards for 2014 for Young CFO of
the Year.

I am married and have two children. I enjoys Pilates, mountain biking and swimming.