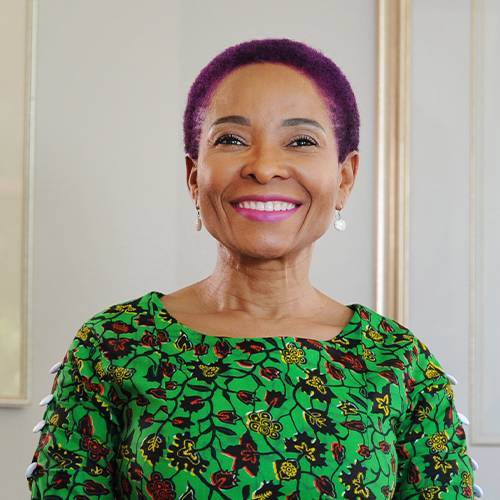 Mamokgethi Phakeng began her term of office as Vice-Chancellor of the University of Cape Town on 1 July 2018, where she had been serving as Deputy Vice-Chancellor for Research and Internationalisation since January 2017. Prior to this appointment she served as Vice Principal for Research and Innovation at the University of South Africa (Unisa) for five years, after serving three years as Executive Dean of the College of Science, Engineering and Technology at the same university.

She holds a PhD in Mathematics Education from the University of the Witwatersrand and is a highly regarded B1 NRF-rated scientist with over 80 research papers and five edited volumes published. She has been invited to deliver over 40 keynote talks at international conferences, and to be a visiting professor at universities around the world (in Australia, Botswana, Brazil, Canada, Denmark, Finland, Germany, India, Italy, Jamaica, Kenya, Lebanon, Lesotho, Mexico, Morocco, Mozambique, Namibia, New Zealand, Pakistan, Senegal, South Korea, Sweden, Switzerland, UK and USA).

She has won numerous awards for her research and community work, including the Order of the Baobab (Silver) conferred on her by the President of South Africa in April 2016. In August 2014 CEO magazine named her the most influential woman academic in Africa and in August 2016 she was awarded the prestigious Businesswoman of the Year Award in the education category. In July 2019 the University of Bristol conferred on her an Honorary Doctorate in Science in recognition of her leadership role in mathematics education in South Africa.

Kgethi, as she is popularly known, was elected as a member of the Academy of Science of South Africa (ASSAf) in November 2007; an honorary member of the Golden Key International Honour Society in May 2009, an honorary life member of the Association for Mathematics Education of South Africa (AMESA) in July 2009 and a Fellow of the African Academy of Sciences in 2018. In 2008 she became the first black South African researcher to be appointed to co-chair a study commissioned by the International Commission on Mathematical Instruction. The study entitled “mathematics and language diversity” has completed its work and published a volume in 2016, which she co-edited.

She is a member of the board of the Oprah Winfrey Leadership Academy for Girls (OWLAG); a trustee of the FirstRand Foundation; the South African Student Solidarity Foundation for Education (SASSFE) and the Pearson Marang Education Trust (PMET). In 2016 she was appointed by the then Deputy President of South Africa, Cyril Ramaphosa, to chair the Human Resource Development Council standing committee on Mathematics and Science Education. She served as member of the board of the Council for Scientific and Industrial Research (CSIR) and chaired its Research Development and Innovation Committee from January 2015 till September 2017. She was elected in 2011 as the first woman President of the Convocation of the University of the Witwatersrand and served for five years till 2016. She led the Association for Mathematics Education of South Africa (AMESA) as its first woman National President from 2002 to 2006, served as founding chairperson of the Board of the South African Mathematics Foundation (SAMF) from 2004 to 2006 and secretary and member of the executive committee of the International Group for the Psychology of Mathematics Education (PME) from 2003 to 2007.

Kgethi is founder of the Adopt-a-learner Foundation (www.adopt-a-learner.com), a non-profit organisation that started in 2004 and provides financial and educational support for higher education to students from township and rural areas.