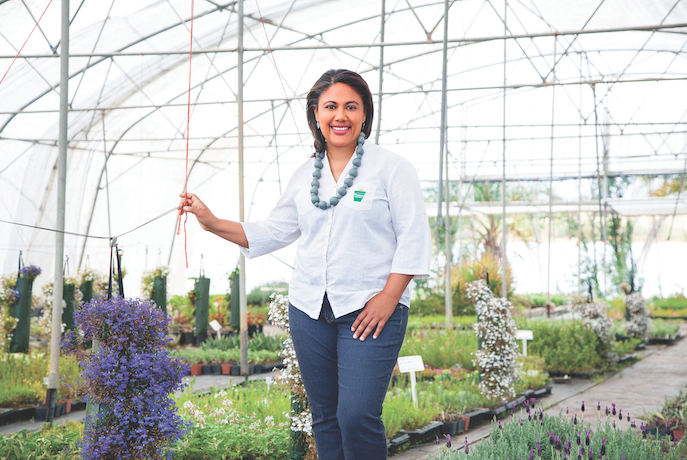 Lindelwa Mabuya of Abagold Abalone Farming in Hermanus was honoured as best female worker. She has worked at Abagold for the past 19 years. She started as a general worker and was promoted to specialist abalone spawning manager in 2000. Her work entails spawning, settling, cleaning the brood stock and feeding them.

Dig for Victory by Dawn Ehrenreich is an organic vegetable and herb garden. The garden was initially established as a result of a “waste wise” pilot project by the City of Cape Town. Dawn was trained as a community facilitator. The project was responsible for fighting dumping in communities through education and awareness programmes. The project developed into a vegetable garden, which later expanded to a local park.

Berene started her business in 2014. She secures the grapes from different sources and makes the wine at Hamilton Russel Vineyards’ cellar. The bottling, labelling and further packaging is done by her and six other female staff members. She also handles the marketing and logistics of the wine herself. Berene is in the process of purchasing 3.5 hectares of land in Tesselaarsdal, Overberg where Pinot Noir grapes will be planted, for use in her wines.

Carmen Stevens has 21 years’ experience in winemaking, having been the first black person to study and qualify as a winemaker in South Africa in 1995.  Her company was registered in 2011. The main purpose of the business is to source, produce, blend and bottle premium quality red and white table wines – exclusively for the export market.

Ashley-Ann is responsible for the cheese-making at Latana Cheese, a small cheese company manufacturing cheese in the traditional way. This process includes no chemicals, colourants or taste substances. Ashley-Ann’s duties include management of the planning, making the cheese, to getting it ready for the market.

Haarlem Vroue Vereniging, led by Viona Kapank, is a community garden in Haarlem, tended by women farming with vegetables.  The garden was started in 2013 by a group of unemployed women looking for a source of food security. They also donate to their community.

Anastasia started a small vegetable farm in 2012. Since then her formal and informal markets have grown to such an extent that she had to increase her production. Anastasia stood out for her passion and dedication to her business.

Viona Kapank, head of the Haarlem Vroue Vereniging in Haarlem, won the category of best subsistence producer. The Haarlem Vroue Vereniging is a community garden in Haarlem, tended by women farming with vegetables. The garden was started in 2013 by a group of unemployed women looking for a source of food security. They also donate to their community.

Makhosazana Sambo has grown a small business operating from her backyard to a commercial undertaking that supplies produce to big retail stores across the country. Before Sambo started Ikhwezi Vegetable and Poultry she was unemployed for more than five years.She took matters into her own hands and decided to plant fruit and vegetables in her backyard.“The end goal with this was to not only have my own business, but to provide employment and fresh and affordable food for locals. I can proudly say I’ve exceeded that,” she said. Today the business supplies top retail stores which is something far more than Sambo dreamed of. Ikhwezi Vegetable and Poultry has been in operation for 16 years and now also sells chickens. The farm employs 67 people, 60 percent of whom are young people. Last year alone, her business achieved more than R3 million in turnover. She has since won numerous awards in farming, including being given the Best Cooperative Award by the Department of Economic Affairs.

Sontundu is a successful young female farmer from Mqanduli in the Eastern Cape. She tells the story of how she got involved in the agricultural sector at an early age, in 1999, with good support from the government and organised agricultural groups.

Over the years, she upskilled herself and diversified her farming business. She produces grains and livestock and supplies local businesses. Sontundu’s business might not be big when viewed at a national scale, but it certainly makes a big difference in the local rural economy of Mqanduli. She is an inspiration to many young women, including those in the audience listening attentively to her story. The enthusiasm was clear from the number of questions that followed our discussion session