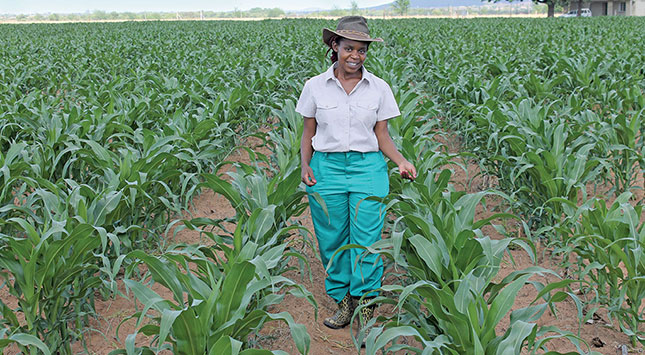 Farming in South Africa has historically been dominated by elderly male and South African have been breaking barriers and changing the face of agriculture. Here is a list of Top 20 South African Women Farmers who are dominating numerous sectors in this field.

Her business in Modimolle, Limpopo has been awarded by the National Department of Agriculture, Forestry and Fisheries as the Young Farmer of the Year 2015 and well as Female Entrepreneur of the Year 2015. The MEC of Agriculture in Limpopo has recognised and awarded Thato for her active involvement as a youth in commercial production. Thato has been recognised and mentored by Investec and Nanjing Agricultural University and gained insight in International Food Production Industries in countries such as Israel and China.

Lerato Senakhomo (27), a full-time commercial and multi-award-winning woman farmer, is the winner of this year’s Young Farmer Award. Back in 2006, the Department of Rural Development and Land Reform awarded township resident Lerato Senakhomo and her family a two-hectare plot of land. In 2014, they were given a further 535 hectares for agricultural purposes. Since then Senakhomo Farming have hit the big time, and have an 800-strong herd of goats as well as possessing more than 70 cattle. In 2017, Lerato was given the Gauteng Department of Agriculture, Forestry and Fisheries Female Entrepreneur Award

Dlamini, who runs the Green Sky Rooftop Garden, has one of the largest rooftop urban farms in South Africa, which grows more than 3 000 gourmet ​lettuce, herbs, peppers, cucumbers and basil plants using various hydroponic systems.  Passionate about the transfer of skills and empowering young women, Dlamini currently employs four female graduates who have expertise in horticulture and agriculture studies.

Jacky Goliath decided to start her own nursery in his back-yard garden with only 1,000 units of 3 plant types (Coleonema, Phylica and Cyclopia spesies), the focus was on Fynbos and indigenous plants in pots and nursery bags to serve the then current market. As demand grew for more indigenous and water-wise plants, the nursery moved in 2005 to a rented site of 0.5 hectare land in Kylemore. With an increased demand for indigenous plants, 2 tunnels, 2 employees and about 20 000 plants to maintain, the water source became too limited and a bigger site was needed for the business to grow. In 2008 the business moved to a 1.5 hectare rented area in Simondium, between Paarl and Franschoek and later 22ha in the Paarl area.  They employ 22 permanent employees with an additional 15 casual labourers during peak times. The nursery hosted about 600 000 plants which include Fynbos plants such as Protea, Leucospermum, Leucadendron, Erica, Buchu, etc., fruit trees, research material and Agricultural crops.

Mmabatho Portia Morudi is the founder of The Village Market SA which is a started as a bee farming initiative focused on creating and finding a conducive environment for bees to thrive.

The founders believed in a harmonies working relationship between bees and rural communities/villages. Considering the global threat to bees, they wanted to create spaces that will allow both to thrive. Theye do this by identifying and training villages in sustainable beekeeping and nature conservation and aid them with setting up beekeeping initiatives. In doing this they are creating a whole new sustainable supply base for honey and organic produce that they  secure through our buy-back policy. The result of this is that TVMA can offer their  partners and customers quality products that are helping create a brighter future for Africa. Initially TVMA was focused on the sale of premium raw honey and organic fresh produce however has since added a natural skincare products and home accessories to their range. All our products are beautifully packaged and come with their own unique stories of each village they are sourced from as a way of acknowledging the wealth of indigenous wisdom, natural resources and rich history of these villages.

Last update on
Published
Author: Wiki Mzansi
Categories: Agriculture, South Africa
Tags: There are no tags for this post